How the #UtahKidsFirst Digital Team Changed My Outlook on ADVOCACY! | United Way Salt Lake
Does your family need assistance? 2-1-1 is here to help. Click here to contact us.

How the #UtahKidsFirst Digital Team Changed My Outlook on ADVOCACY! 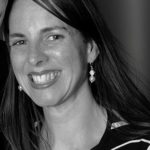 Anyone familiar with United Way is well acquainted with this three-part, action-oriented invitation to help make a difference. Having been involved with United Way campaigns for years, I’ve found that the giving part is easy. I don’t miss the money because I know it’s being invested in programs and services designed to create lasting change for the people who need it most. And with United Way of Salt Lake’s annual Day of Caring and other service opportunities, volunteering has always been fun and rewarding. So, why the reluctance when it comes to advocacy?

For those of us in the camp who have been holding back, we have our reasons. For many of us, it’s simply unfamiliar territory or a function of time. We’re busy, and we’re already giving and volunteering where we can. While I could see the value in it (and kudos to UWSL for crafting a legislative strategy and carrying the torch, I didn’t feel like I had much to contribute. Until — 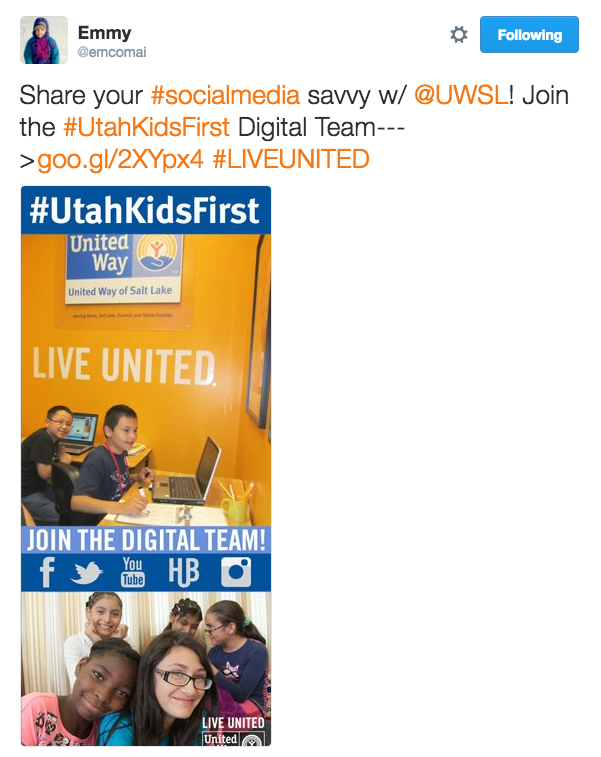 I came across a tweet on my cell phone, inviting me to advocate for Utah kids — online. I could do that! Along with other “digital advocates,” I attended a kickoff meeting with United Way, and learned about the social media campaign and the bills we would be championing. I also met other people like me who share my interest in the work the United Way of Salt Lake is doing to truly change the odds for the most vulnerable members of our community.

I heard Governor Gary Herbert say that the 45 days of the legislative session were the most important 45 days of the year for Utah. After volunteering as a digital advocate, I could begin to see why. Through the #UtahKidsFirst campaign, and by posting tweets, emails, and microblogs supporting “Stand4PreK,” I learned much about the legislative process, as I followed legislation in a way I hadn’t before. I began to see how hard our legislators work and how seriously they take their responsibilities as they debate the bills that are presented. Most significantly, I discovered that I have a voice and that my voice matters, because, through digital platforms I can join fellow advocates in amplifying important messages and speak on behalf of those who are unable to speak for themselves.

Attending a United Way Day on the Hill event, I sat in the House Gallery and witnessed the final discussion on #SB67. The energy in the House was palpable as the votes were tallied. In the end, the House and Senate passed all three bills for which the digital team advocated. Our team recognizes there were many factors in play, yet it was rewarding to play a part. 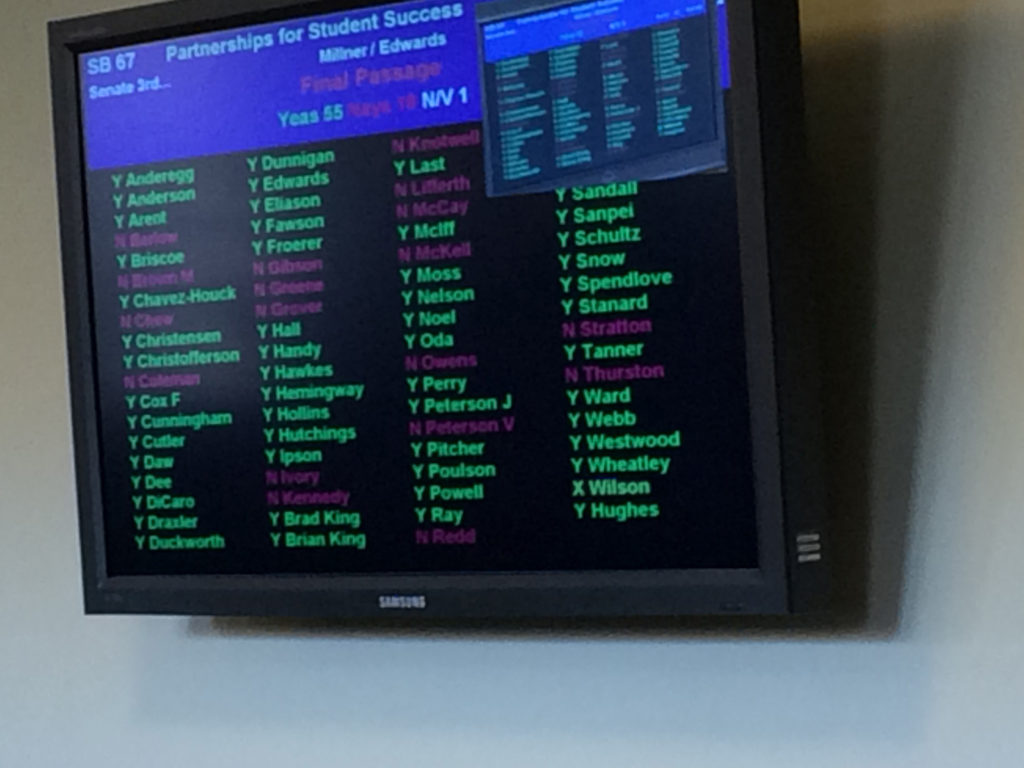 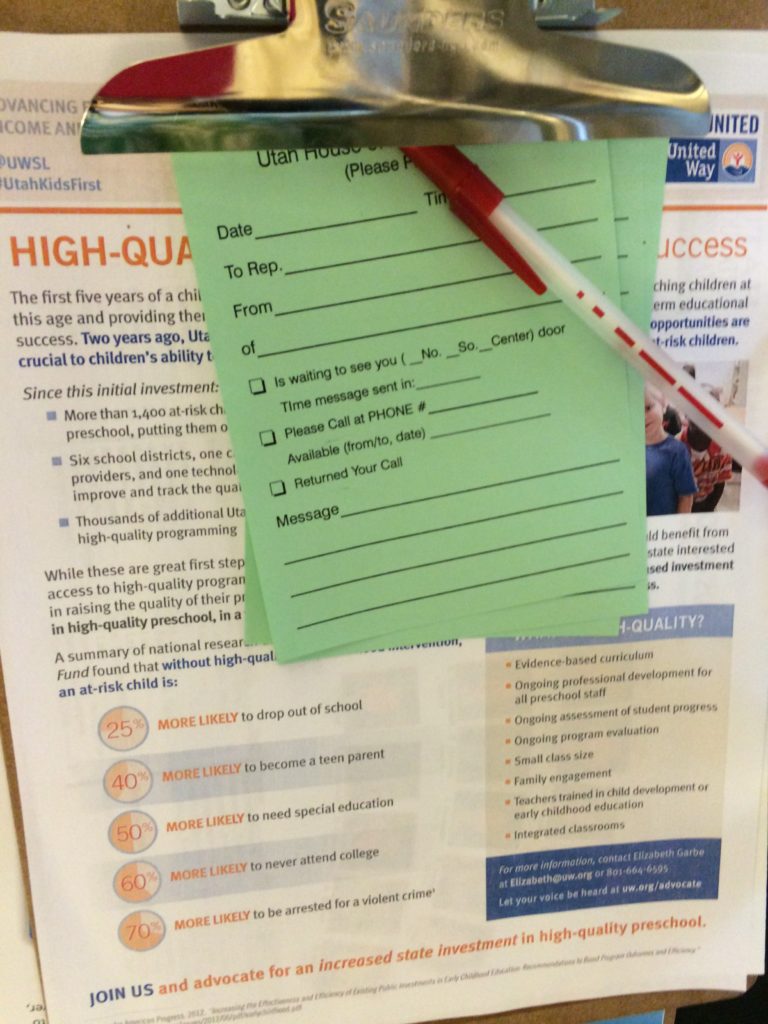 Utah is our community. It’s a great community, but there are very serious challenges — intergenerational poverty, lack of opportunity, and educational achievement gaps among them. We all have a voice and we can all effect change — and our voices are needed! 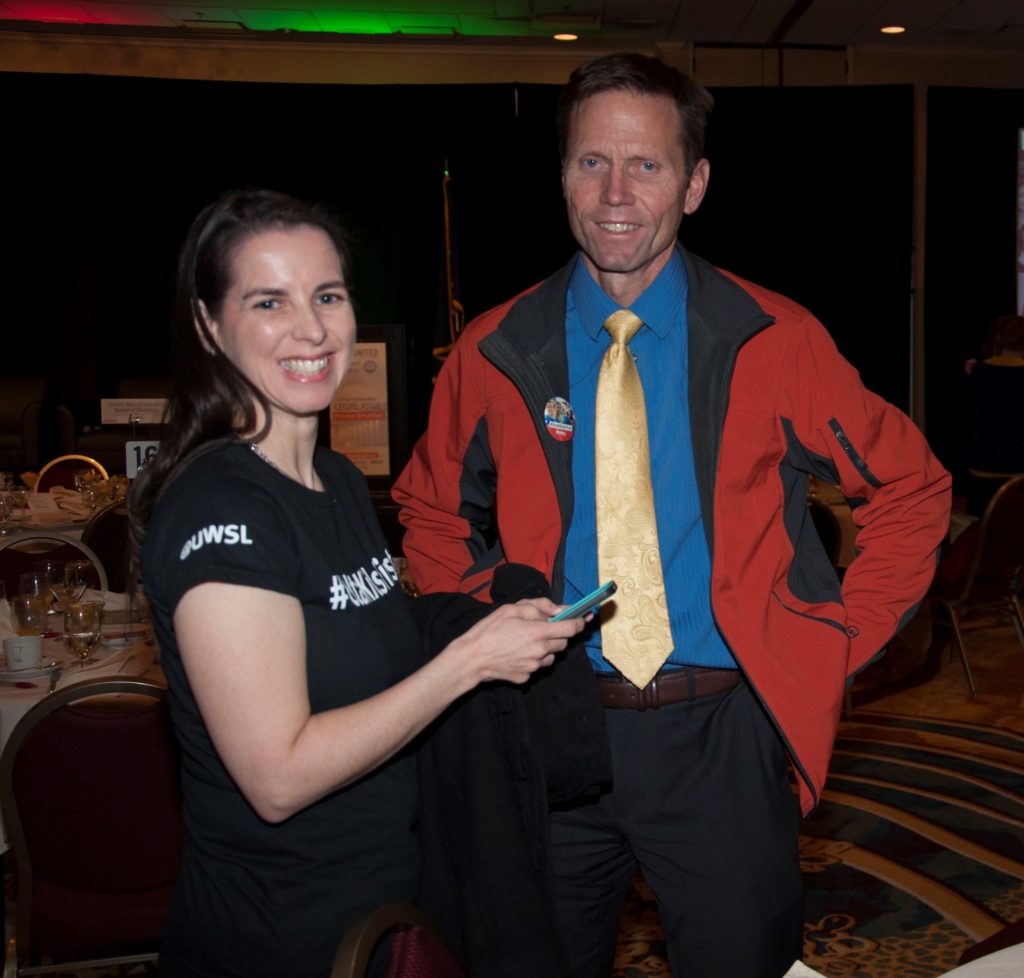 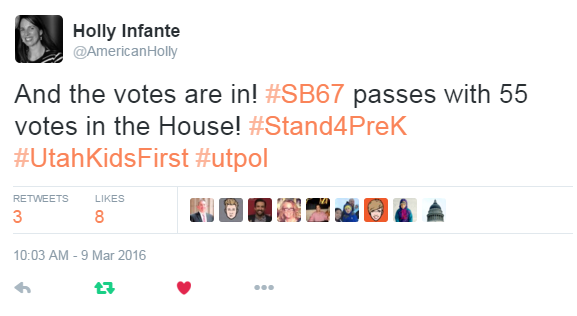 To become a part of the UWSL Digital Team or to learn more about how
YOU can advocate for important issues, contact Emilia Comai at emilia@uw.org.